I recently moved and I found that this was the perfect opportunity for me to become a minimalist, and why you should consider becoming a minimalist too. I've always had the thought, but never fully executed it. Why I chose to do this now is because during the time period and after a move, things are usually roughly or not organized at all. That means I would have to sort through everything eventually, so why not apply minimalism at the same time, right? The only extra task I'm adding on is the process of getting rid of stuff.

What Is A Minimalist and What Is Minimalism?

A minimalist is a person who practices the concept of minimalism. The definition of minimalism can vary, but from what I've concluded based on the several popular definitions of the practice is living with less stuff but with intention. Now what that means is you are not only living with less stuff, but also with conscious awareness of what stuff to keep or to get rid of while being okay with it. This also includes when you are out shopping for stuff, you are making a conscious effort and being aware as to whether or not you truly need something versus just wanting it for the sake of wanting it.

Here are my top 10 reasons why I decided to be a minimalist.

Becoming A Minimalist Can Potentially Help You Lower Your Expenses

One important practice is to lower your expenses, and by becoming a minimalist, that is just one way I am taking advantage of to lower my expenses as much as possible.

Let's say you are out shopping next time, and you see something you want, but not need. You are tempted to buy that item. However, because you've become a minimalist, your minimalist side will stop you from getting more stuff which will cause you to not buy the item, resulting in money not having to be spent on something pointless!

You Can Earn Some Money!

During the process of becoming a minimalist, you are most likely going to get rid of some stuff. But in the process, you'll probably come across the reasoning of why would I ever want to get rid of this item that is in a good condition?

My question is, why would you?

In fact, why not consider doing a garage sale or perhaps sell it online on sites such as eBay or Craigslist!

In return, you get to get rid of stuff that's in good condition, earn some money, and help out someone who is looking for an item at a discount! If you haven't used sites to sell stuff, why not take this opportunity to learn it - it's very easy?

More Time To Do Other Things

One thing that is not so obvious to most people in the beginning is by having a lot of stuff or clutter, that usually results to more time being spent.

However, by becoming a minimalist, you get that extra time spent cleaning your extra stuff back. Depending on how much stuff you have, this can range from a few seconds, several minutes, or maybe even hour(s). This can get worse depending on how thorough you decide to clean your stuff as well as how organized you are.

At first, you might think what can I do with just a few minutes saved? I'm glad you asked. :)

The list goes on, but these are just some activities that I found most people do so I decided to use those as an example. In fact, if you do the math, did you know, for 1 quarter based on 1 class, the total amount of time you spent to learn something new without practicing it is 24 hours total if you exclude all the time gaps you are out of class?

Time is the most valuable asset we have, yet most people take it for granted. It's time to be more mindful about it, because it's constantly getting spent regardless if we're doing something or not. It's just a matter of what we're spending our time on. After all, once that time is gone, it's gone. Unlike money and material items, time is something you can't buy back nor earn back once it is spent.

Less Things To Maintain and Manage

My second reason to why I decided to be a minimalist is to have less things to maintain and manage.

Having a lot of stuff results in more things to maintain and manage. Things get unorganized and misplaced once they are used (if they are even being used at all). Not only that, they need to be kept clean.

By having less things as a minimalist, that will result in less things to maintain and manage. After all, if you plan to move someday, you don't want to deal with having to organize a huge pile of mess.

Being a minimalist allows you to be more productive. I'm sure you've heard the phrase that "having less is more" when it comes to the topics of mindfulness, productivity, or minimalism, because it's true!

By having less clutter around the house, it can help you be more productive.

Have you ever had that moment when you tried to focus on a certain task or do something that involves some intense focus, but you randomly just look around only to feel frustrated for some reason and no answer pops up in your head? Part of that is from seeing the presence of clutter or just having a lot of stuff near you. It feels suffocating sometimes - I know it first hand.

Therefore, by being a minimalist, it can make you be more productive since there are less stuff in your peripheral vision, less clutter in your mind when you see things around you, and this means less things to distract you!

Being A Minimalist Helps You Be More Organized

It's hard to stay organized especially when you have a lot of stuff in the house. One way to make the process of organizing stuff easier is to have less stuff. If there's less stuff to organize, that makes the overall process faster and easier to do.

Being A Minimalist Helps You Have More Space

This reason is an obvious one, and that is by being a minimalist, you would have more space.

By having less stuff around the house, that means you will have more space to walk around, and to store things that actually matter.

Being A Minimalist Can Be Environmentally Friendly

Because minimalism is about using less, that means your trash will be lowered across your lifespan. What this means is less stuff is going into the landfills, and you are actually helping the environment just by being a minimalist.

Clutter can make life feel stressful. It can make one feel claustrophobic in both mind, body, and spirit.

By going the minimalist lifestyle route, having less can result in a less stressful lifestyle.

Life Becomes Less Dependent On Things And More On People

After a week or so of going through my items, getting rid of them, and organizing what I have left, I feel a lot happier since there is a lot of space now in my room. Not only that, I no longer have to dread the days where I have to go through my things ever again because there's not much to go through to begin with! I do have some stuff in boxes I might want to go through again, but I'll save that for another time. For now, it's time for me to go back to working on some more important goals.

My 2 Week Experience with Soylent

Back in my 3rd or 4th year of college, I decided to try out Soylent to see what it tastes like just because it seemed like an interesting experiment. [Read more] 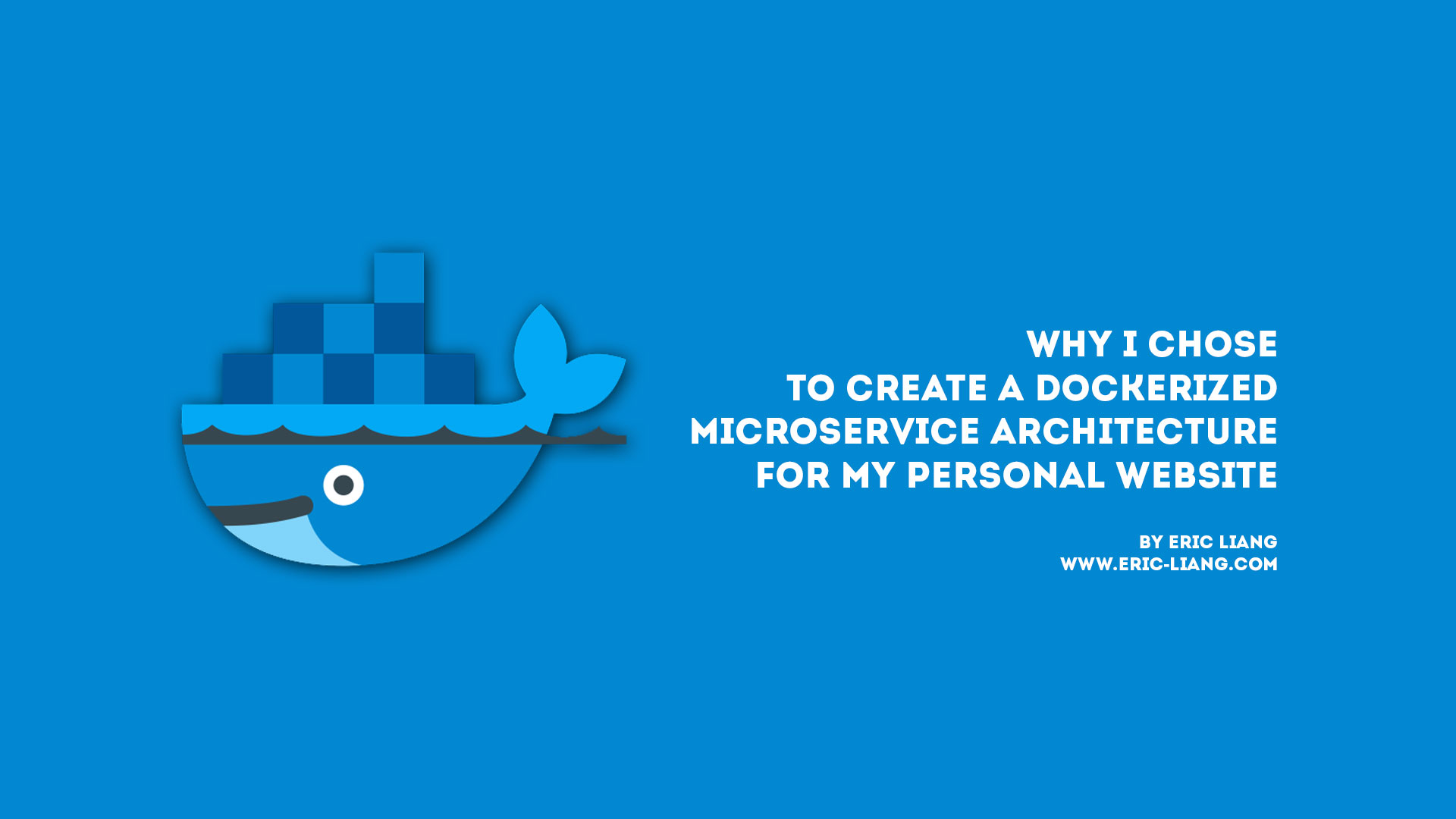 I recently redesigned and redeveloped my personal website using a dockerized microservice architecture approach. A personal website should be simple, and some might think it's overkill, but in my case, it was the perfect solution to achieve my goals. [Read more]